After our last day of racing at the Olympic Trials, my parents took my husband Alex, me and Jess out to eat in St. Armand’s Circle. We picked an Italian restaurant that had caught my eye the previous week when Jess and I were on more stringent meal plans. After several days of racing, I was craving a hearty, warm meal, and savored the salmon risotto that I ordered for lunch. After the meal, we stopped by Kilwin’s for ice cream, at my sister-in-law Becky’s recommendation. I ordered the Heavenly Hash flavor, which I had not come across since college!

This blog entry is the first in a series of six ways to prepare salmon. Salmon is one of the staples in the Taylor kitchen, and Jess’s boyfriend Austin recently requested my top three salmon recipes. There are so many favorites to chose from, so why not six?

For my birthday eve meal, Alex and I cooked our own version of salmon risotto. We loaded up our risotto with as many veggies as possible, and used the Persian spice zarchobeh for extra flavor and color. We broiled two small filets of salmon, and added the cooked salmon after the Arborio rice had absorbed all of our cooking liquid. 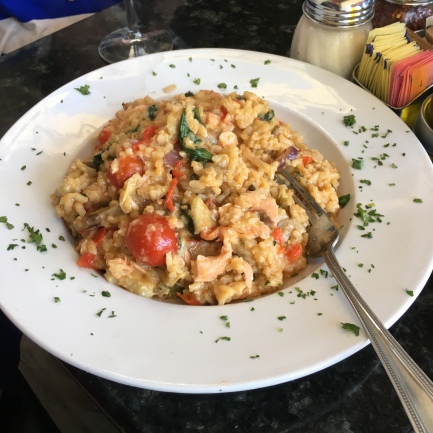 The original salmon risotto at Venezia in St. Armand’s Circle

Two beautiful filets of salmon, equaling about 3/4 of a pound 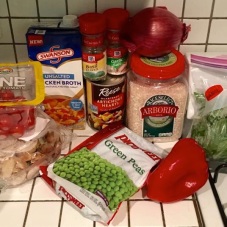 Most of the risotto veggies

Red onion and lots of butter

A pile of arborio rice, waiting to be combined 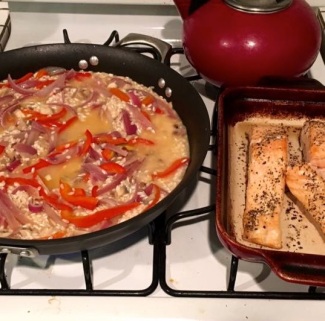 The salmon filets are 95% cooked through, and ready to be added to the risotto

Alex Taylor – another Taylor in your kitchen! – adds frozen peas to the mix 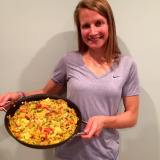 Posing with the final product! 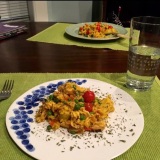 Our shared birthday meal on our favorite plates

We used 1/2 stick of butter as recommended in the “Wild mushroom risotto with peas” recipe by Giada de Laurentiis in “Everyday Italian,” but you could get away with using half that amount.  Allow a full hour for cooking this meal; the risotto alone takes at least 30 minutes, and you will want to be patient while all cooking liquids get absorbed.  White wine is traditionally a popular addition to risotto.  If you want to use white wine, pick a dry wine and add just 2/3 of a cup after you add your Arborio rice.

The first risotto recipe I ever followed came from Giada’s cookbook.  Patrick and I made the “wild mushroom risotto with peas” found on page 131 of “Everyday Italian.”  I followed the sequence of Giada’s recipe loosely when I created this dish.